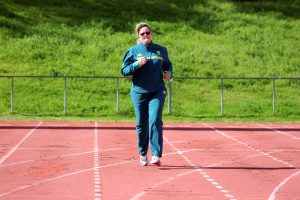 Bellville Athletics Club’s Adri Jordaan was Team Manager of South African track and field team that took part at the IAAF World U20 Championships in Finland in July 2018.

She is not only the Secretary of the Bellville Athletics Club, but also a mother figure to many of the athletes who are part of the maroon and navy-blue army.

Meet Adri Jordaan from Welgemoed who has been involved in track and field athletics for close to four decades and is still going strong.

If she is not busy sharpening her skills in the Club’s boardroom, Adri is touring with Provincial and National Teams to global athletics competitions as one of the Team Managers.

In July 2018, Adri was Manager of the South African team who finished in sixth place on the medal standings at the International Association of Athletics Federations (IAAF) World U20 Championships, in Tampere, Finland. The South African u.20 team bagged three gold medals and one bronze which saw them make history by becoming the first SA u.20 team to finish in the top six at a global Championships.

Adri who has been married to her husband for 38 years, said she is proud of each athlete who took part in the IAAF World U20 Championships.

“They worked hard and went the extra mile. Every time we won a gold medal and our national anthem was played, it gave me goose bumps.  Two of my personal highlights of the tour were the huge respect we received from other countries around the globe and when the athletes were not competing, I loved exploring the city life in Finland. One could safely walk around the city centre all hours of the day. During the summer months it never gets totally dark at night. In winter they only have eight hours of daylight per day,” she said.

Adri was also Manager of the South African teams that competed at the 2016 Confederation of African Athletics (CAA) African Senior Champions in Durban, the 2011 CAA Southern Region Youth and Junior Championships in Zimbabwe and the 2011 IAAF World U18 Championships in France (her first Manager position of a National Team). She has also been Team Manager of a multiple Western Province Athletics (WPA) teams who took part at national championships.

The soft-spoken mother of three children and grandmother of two grandchildren said dedication and hard work at club level played a major role in reaching her goals of becoming a Team Manager.

“Commitment towards all WPA track and field competitions and serving on WPA committees also played an important role.  But most importantly is my love for sport in general and track and field athletics in particular, plus the wonderful athletes and lovers of athletics you meet every day.  One day I would like to be appointed as part of the Team Management of a South African team to the Olympic Games,” she said.

It comes as no surprise why Adri is still involved in the sport:  at school, she was an enthusiastic athlete herself.  The former CR High School pupil in Pretoria competed in long jump, high jump and hurdle events at a local level.   Adri and her father also played competitive Badminton and achieved Northern Transvaal colours.  She was also a gymnastics coach and gymnastics judge in Western Province.  Adri’s love for sport influenced her middle daughter to compete in Pole Vault and compete internationally.

In 2018 Adri is still living her sporting dreams by touring the country and the world with WPA and ASA Track and Field Teams.