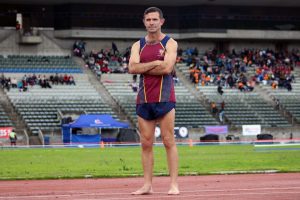 Bellville Athletics Club’s Brian Records will be smiling about his consistent start to Western Province cross country league. Here he is pictured during a training session at the Bellville athletics track

He is not only an athlete and a teacher of track and field but also known to many as a commentator at local meets in and around Cape Town.

Meet Bellville Athletics Club’s, Brian Records, 47, who has been around the athletics circuit for two decades and continues to strive for excellence.
Brian from Parow will be smiling after clocking a season’s best of 43min41sec on his birthday, in the senior men category, at the Western Province cross country league 2 meet, at Zeekoevlei, on Sunday, June 17 2018.
Before the WP cross country league 2 meet athletes and spectators paid tribute to track and field starter George Lodewyk who passed on Thursday June 14 2018. They chanted ‘lane 8 can you hear me?’ Those were the famous morning words of George come race time. Brian ran in a red headband so show his respect for George.
In May 2018, Records got his 2018 WP league 1 cross country season off to a promising start after he finished in the top sixty clocking 44min49sec, in the senior men category, at Silwerstroom, in Atlantis.
In the same month, Brian competed in his second FNB Cape Town 12 One Run, clocking 52min07sec, in the 12km distance, that started in Milnerton and finished in Cape Town CBD.
Earlier in that week (same week as the Cape Town 12 One Run), Brian competed in his fifth annual 21km Slave Route Challenge, in Cape Town, running a personal best of 1h44min.
What was even more impressive was that Brian has never worn takkies or stopped at a water station since he has been doing the Slave Route Challenge.
The event which is one of the biggest road races in Cape Town started in Darling Street and finished at the Grand Parade. It criss-crossed the CBD before taking runners past historical landmarks, such as the Castle of Good Hope, the Whipping Post, the Old Slave Church, the Iziko Slave Lodge and the Slave Tree Plaque on Spin Street.
Come rain or shine Records is renowned for being barefoot whether he is coaching, taking part in a competition or standing on the side of a track commentating.
Records said the reason for running barefoot is that it reminds him of when he was youngster.
“It is not about the kit you wear, but rather about the effort you put in that will make you successful,” said Records who is not the only athlete renowned for running barefoot.
Bloemfontein’s Zola Budd broke the women’s record in the 5000m, clocking 15:01.83, in 1984 and Ethiopia’s Abebe Bikila won the 1960 and 1964 Olympic marathon in Rome and Tokyo. Both Zola and Abebe competed without shoes.
Although Brian often competes in track events, one of his fondest moments was running the 800m event after he clocked a personal best (PB) of 1min48sec at the Engen Summer Meeting, at the old Green Point track, in 1993. In the same year, he ran a PB of 2min23sec, in the 1000m event, at the Weetbix Meeting, at Coetzenburg Athletics Stadium, in Stellenbosch. While his best showing at a national competition was running the 1500m final, in 1988, in Port Elizabeth.
Like most athletes, Records always challenged the children in the neighbourhood when growing up whether it was sprints or long distances and has never looked back since then.
When not busy making his mark on the road or over the hills, Records is busy sharpening his coaching skills.
“Athletes have come and gone. My greatest goal is to keep them motivated and make sure they achieve their goals,” said Records who had numerous athletes in the Western Province Athletics (WPA) track and field and Western Cape schools’ cross country teams.
Brian has proved to be a multi-talented sportsperson who is an excellent track and field commentator. He got into commentating 15 years ago when a commentator could not make the meet and he was asked to fill in.
“One of my fondest memories was commentating at the 2003 WPA Youth and Junior Champs when my athletes made it a clean sweep in the girls’ under-18 800m event, at the Bellville athletics track. Commentating at the 2017 MTBS was also something special because it is one of the biggest inter-school meets in the Western Cape,” Brian said.
Athletes of all ages (older than 9) who are interested in being coached by Brian in either or middle distances, long distances or cross country, are invited to contact Brian via email records.brian@gmail.com or cell phone (082 731 1085).
Story by: Keagan Mitchell