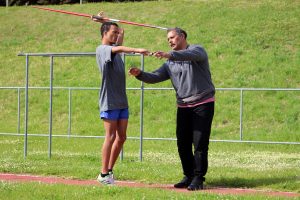 “Being able to help others succeed puts a smile on my face,” says Mogamat

He was not only a great teacher in the classroom who wanted the best for his pupils, he also goes the extra mile for his athletes at the Bellville Athletics Club.

Meet Mogamat Zain Lamara who specializes in coaching disabled and Masters athletes at the maroon and navy-blue army and is an executive member on the Western Province High Schools’ track and field board.

Mogamat, who grew up in Athlone and attended the former Habibia Primary School, was an all-round sportsman during his school going years.  He was active in six sporting codes that included:  athletics, soccer, rugby, volley ball, swimming and squash.

After he matriculated in 1978 at Belgravia High School, Mogamat cut all ties with sport due to work commitments. He worked in the exam section at the Department of Coloured Affairs before moving on to Hewat Teacher Training College, where he work as an administrator.

Eight years later, he got the opportunity to study and he made full use of it.  He completed his Bachelors of Arts in Physical Education and Geography and followed that up with a Higher Diploma in Education. A few years later, he did his honours in Kinanthropometry (human measurements) at, at the University of the Western Cape, in Bellville.

In 1987, Mogamat started teaching Physical Education at Belgravia High School and a few years later he started teaching Geography.  During this period, he became the head of athletics at Belgravia and he also coached volley ball and squash.  Mogamat also assisted and managed the baseball teams of the school who competed at inter-provincial tournaments.

In this period, he was elected to the Western Province High Schools’ athletics board where he serves as one of the convenors of selectors for the Western Province and Cape High School teams.  He also accompanied these teams to the South African High Schools’ Championships.  Six years ago Mogamat retired from teaching, but he still serves on the Schools’ committee.  In 2011, he accompanied the Western Cape Team to the South African Games in Polokwane.  This was where and when he came into contact with disabled sport when he offered some advice.  This encounter prompted Mogamat to learn more about disabled sport and like they say: the rest is history.

Currently Mogamat coaches more than a dozen athletes who include disabled, transplant and masters athletes.  A number of the athletes are SA champions and record holders in their respective classes and events.

One of the more experience campaigners Jane Mandean who has been with Mogamat’s training group for the past four years took the bronze medal in the F37 discuss event, at the Paralympic Games, in Sydney, in 2000.  Jane competed in the Paralympic Games in 1996 and 2004 but could did not finish on the podium.  She is currently the South African record holder in the F34 seated discuss event

One of the top performers in Mogamats’ group is Lenny Bailey who is the current world champion and multiple record holder in the open category shot put, discus throw and javelin throw events.

Lenny is currently (October 2018) representing SA at the World Championships of the International Athletics Association for people with Downs Syndrome in Portugal.

Two athletes in his group will represent the country at the 2019 World Transplant Games in Newcastle, the United Kingdom.

Mogamat said his coaching goal is to encourage as many disabled and master persons as possible to be involved in sport or some kind of physical activity.

“Being able to help others succeed puts a smile on my face,” he said.