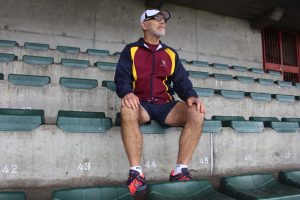 Age is more than just a number for Bellville Athletics Club’s Jürgen Spencer who’s been the race walking king for close to four decades.

Jürgen,77, from Table View has dominated the South African Masters track and field Championships over the years and his vast knowledge and experienced has rubbed off onto his athletes.

The former German citizen has taken part in 32 SA Masters Championships has won 61 gold, one silver and in his first attempt in 1986 one bronze medal at the SA Games, in Germiston.

In 1996, Jürgen competed in the African Masters Championships where he won two gold medal, in the 55/59 age category, in the 5000m track race and 20km road race events, in Windhoek, Namibia.

However, his biggest achievement was being crowned world champion in the 55/59 age category in the 5000m track race and 20km road events, clocking 23min52sec and 1hour45min16sec, at the World Masters Championships, in Durban, in 1997.

Jürgens’ race walking career started at a late stage (1986) in his life due to work commitments and it came by somewhat of an accident that he found himself in the sport. Whilst working for a Uranium mine in Namibia, he was roped into race walking as one walker could not make the Chamber of Mines competition. This was a competition where mine athletes in Namibia took part in an annual two-day track and field meeting. Jürgen took an instant liking to walking, after finishing fourth in the 3000m walk, and pursued this sport further.

Jürgen started coaching in Swakopmund after completing the level one coaching course for racewalking, at the University of Stellenbosch, in the 1987/1988 athletics season. He moved to Phalaborwa, joined the Road Runners Club and became chairman of the affiliated Phalaborwa Walkers Club. He coached and raced here and throughout South Africa, until the end of 2000.

In 2002, Jürgen joined Bellville Athletics Club, but could not always be present in the early years due to work commitments in Zambia. Jürgen trained at Bellville under coach Chris Carstens until his career and medical hip problem prevented him from fulfilling an effective coaching role at the club. Jürgen continued the clubs coaching role to the best of his ability and has been doing so ever since.

At present (July 2018), Jürgen coaches close to a dozen walkers with all of them reaching their Western Province colours for race walking. Four of his walkers took part in the SA Masters Championships, in Bloemfontein, in April 2018. Two athletes received their national colours for the first time, and two were awarded national colours re – awards, after achieving national standards in a new five-year age category.

“I am thankful and proud for having been able to compete together with/against senior athletes at an advanced age, right into my mid 50’s. I am proud of all the accumulated records, however, with my ‘coaching hat on’, I will help and do my level best, and assist any athlete willing to work hard, to topple my records”, said Jürgen who emails a weekly write-up to over 70 walkers on various race walking topics, hints, advice, training schedules and how to improve their race walking techniques. These reports are also published on the website of the Bellville Athletics Club: www.bellvilleathleticsclub.co.za

“I don’t coach standing with a whistle on the side of the track, saying ‘do as I say’. I do the programme together with my walkers. I lead, observe, critique, suggest, give feedback and make recommendations. It is rather a training/coaching session along the lines of ‘show/tell’ and ‘do as I do’. I enjoy race walking and coaching very much, and all the work I do for this sport, comes free of charge”, he said.

In May, the WPA race walk commission held a race walking seminar/workshop for juniors between ages of 10 and 18, at the Greenpoint Athletics Stadium. Jürgen was invited to share his knowledge and experience with those who attended the event.

“We had over 100 children with their teachers/coaches filling the conference room, and later on the track, all keen to learn more about the sport of race walking. I will always go out of my way to help assist those who wish to excel in the sport,” he said.

Athletes of all ages who are interested in being coached by Jürgen in race walking, are invited to contact him via email  spencer@baypointtrading.co.za or cell phone (084 272 0960).